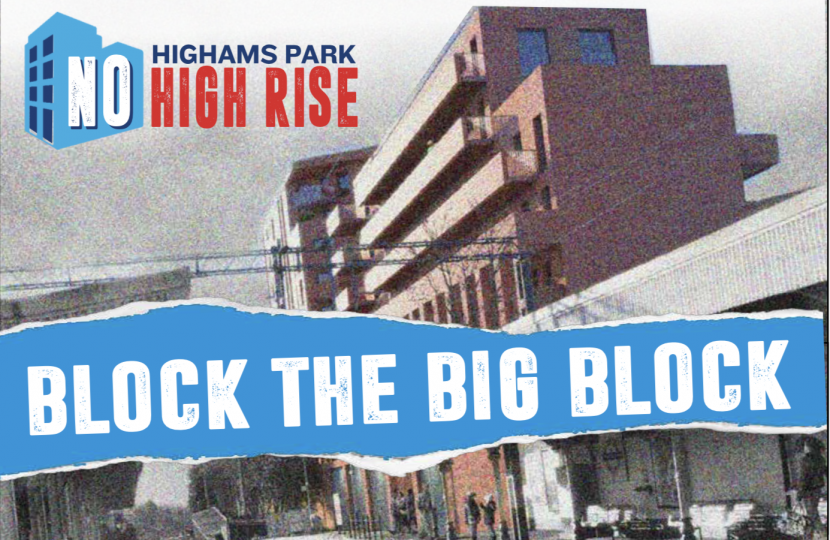 The official application to develop the James Yard site has now been lodged. We believe the two dense blocks of five stories proposed is still too high and an over development of the site.

Over 3,000 residents signed our petition against the initial plans for a nine-storey block and we believe we can come together again to fight the current plan.

The development does not comply with the Neighbourhood Plan that was voted for by Highams Park residents and unanimously passed by Full Council earlier this year.

Many residents have been in touch, concerned over the effect of this proposal on the whole area, and so we are publishing the below guide to assist those looking to object.

The more objections the council receive the more persuasive the argument against the proposal is.

Key points we suggest you highlight are listed below.

The plan states that design will be high quality, positively contribute to the character of existing buildings and take in to account the local settings and building lines. This proposal does not meet that criteria.

The area has clear architectural heritage with an attractive character and distinct local identity. These positive features need to be protected and preserved. New developments in such areas need to fit in rather than stand out.

The proposal also makes references to the nearby Signal Box and the Regal building but makes no reference to the immediately adjacent and historic Highams Park Station building. This totally invalidates the character assessment, which defines the station building as the main feature and focal point of the town centre.

The main feature of the area is the railway station, with the re-purposed signal box (built 1925), together with the active feature provided by the level crossing. The retail lined roads radiating out from the rail crossing create a “marketplace” feel to the area. The Millennium Clock and new landscape features in Signal Walk reinforce the area’s role as the “town centre”.

The modest scale of buildings allows a constant backdrop of mature trees as a key character aspect of the area, complemented by well-established street trees viewed along the radiating streets. The Larkshall Road frontage also has a wide grassed area with mature trees providing a buffer between the industrial buildings of the industrial estate and homes to the east.

The proposed development does not respect this nor do “positively contribute”.

We believe this proposal should be declined as it completely fails to demonstrate how it has taken into account and been informed by the local character context as articulated in Character Assessment 9 of the HP Plan. Furthermore, this proposal does not enjoy the support of local people or comply with the Council’s aspirations for this site in the emerging Local Plan.

For our Campaign Spotlight on the Hartlepool By-Election, meet Jill Mortimer, the Conservative candidate for Member of Parliament in Hartlepool.