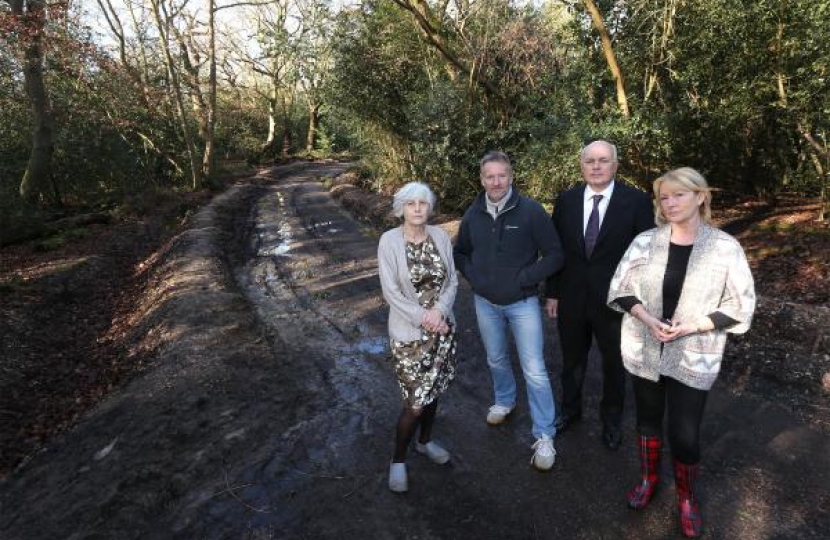 Iain Duncan Smith MP recenly met with Kaye and Paul Green and Su and Terry Manning live in two houses at the top of Bridle Path in Woodford Green, who claim they are regularly kept awake at night because of fly-tipping, groups of youths congregating, drug taking and alleged prostitution.

They claim its 'off the beaten track' location has been used by arsonists to torch cars, and cars have been abandoned by men being hunted by the police.

Cars regularly get stuck in the mud or in a ditch and the Mannings and Greens are regularly called upon for help, including giving access to cars on their driveway so they can turn around.

On numerous occasions, they have been unable to leave their driveway having been blocked in by other cars, including a driver who pulled up to have a sleep.

Problems have persisted for years as they say neither the City of London Corporation or Waltham Forest council will take responsibility, with both claiming to own land at either side of the pathway.

Mrs Manning, 62, says the "constant aggravation" leaves her feeling anxious as she drives up to her house.

Mr Manning, 59, said: "It's like the wild west as anything can go on and no-one is willing to take responsibility.

"We need proper signage before the path explaining it is access only to private property".

Mrs Green, 57, has lived at the Lodge Cottage, which used to be part of the original White House at Haven House, for 24 years.

She said: "We've been told it is a 'no man's land' but it is regularly used by the community so one of the institutions should take responsibility, put some signage up and maintain the road.

"The fly-tipping is getting worse as once they find the spot, they keep coming back.

"There are regularly people here late at night who are up to no good. I've found bags with needles and it is being used for prostitution.

"These unnecessary concerns are making it unpleasant for us to live here."

MP Iain Duncan Smith has promised to contact both parties and the police to make them aware of the illegal activities.