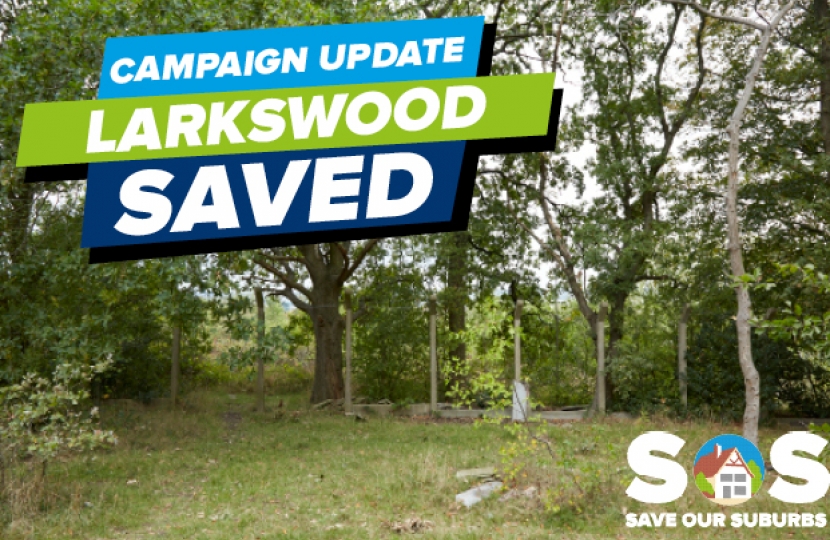 Local Conservative Councillors have been informed that Officers from Waltham Forest Council are going to recommend that the green space behind and adjacent to the New Road Leisure Centre be designated as green open space, which would protect it from development. This has come as welcome news to Local Conservative Councillors who had been campaigning vigorously with local residents to save this space from development.

The area concerned was the site of the former Larkswood Lido and is now a mature green open space rich in Wildlife. It therefore came as a shock when the council earmarked this site as appropriate for development.

The Friends of Ainslie and Larks Wood (FOAL) worked with the local Conservative Councillors and the Highams Park Planning Group, to submit an application to designate SA64 site A (please see photo below), as green open space on 6 October 2020, to protect the site from any future development. To further support FOAL, Larkswood Conservative Councillors launched a petition, which secured over 2,000 signatures and over 350 people wrote in to the Council directly, asking for the green open space to be saved. In response, the Council commenced a consultation process, with a view to developing a “Masterplan” for the entire site.

Within their application and in correspondence thereafter, the Friend of Ainslie and Larks Wood, highlighted the established wildlife and trees which would be in danger as a result of the potential development. As part of the Council’s master planning process, the Council conducted an ecology survey of the former Lido site.  The Ecological survey identified that woodland from the Larks Wood had encroached on the area. Unfortunately, precious wildlife grassland is being eroded by the scrub encroachment demonstrating the need for this site to be maintained. The big finds were the Wild Service Trees (Sorbus Torminalis), which are incredibly rare, are on the site and the grassland on the Northern Edge of the site is priority one habitat meaning the site is of great ecological value.

The final decision to designate is due to go to Cabinet on 18th July 2021.

“After months of campaigning, I could not be happier that the Council has confirmed that they will be seeking to designate the former Lido site, as Green open space, protecting the mature trees and wildlife, residents have come to enjoy. I sincerely hope the Council works with the leaseholder to make this land accessible to residents, especially as saving this space was a real community effort"