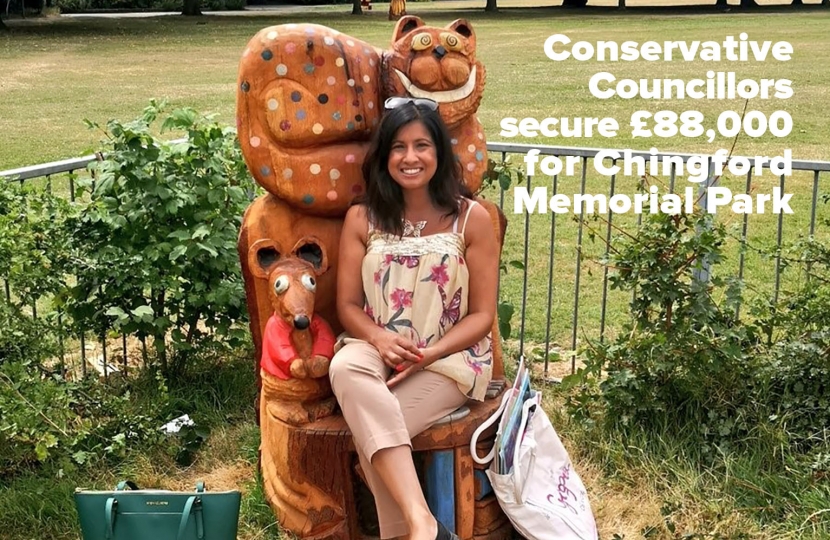 Two years ago Cllr Seesunkur (Larkswood Ward), launched a petition calling for an upgrade to the Tennis Courts in Memorial Park, South Chingford. The courts had been left in a state of disrepair for some years, fences were torn and tree roots pushed through the ground. Between the residents group, Love South Chingford and the local Councillor, over 300 online and paper signatures were collected and submitted to the Council.

After this petition, the Council did repair some of the fences and attempted to tidy up the tennis courts, but it was not enough in the eyes of your Larkswood Conservative Councillors. Because although Memorial Park is categorised as a Premier park, it had not been invested in for some time.

In 2019, Cllr Seeunkur was successful in getting wooden carvings made, which created a story telling area for children in the wild meadow area and Cllr Saumarez worked to secure planters for local children. However, our Councillors continued to chase the Council for more improvements.

This week, Larkswood Conservative Councillors received an email which advised them that £88,000 would be allocated to the Memorial Park as the tennis courts were seen as a health and safety risk. It has been proposed that the £88,000 will be spent on renewing the tennis court fencing, new nets and posts for the courts and re-purposing the two derelict courts. The Council will be consulting with Park users with regards how the two derelict tennis courts should be re-purposed.

Cllr Selina Seesunkur said “This is really good news for residents in South Chingford. Doing the petition for the tennis courts was my first campaign after I was elected, it’s been over two years but we got there in the end. Over that period, The Parks team have kept in touch and made a series of good recommendations, I hope we are able to get the outdoor gym we have been discussing. We are grateful to the Parks team for their hard work and I give my thanks to all the residents who supported our efforts and signed our petition.”

We're constantly campaigning on behalf of everyone who lives in Chingford & Woodford Green. Follow us at https://www.facebook.com/CWGCA.org/