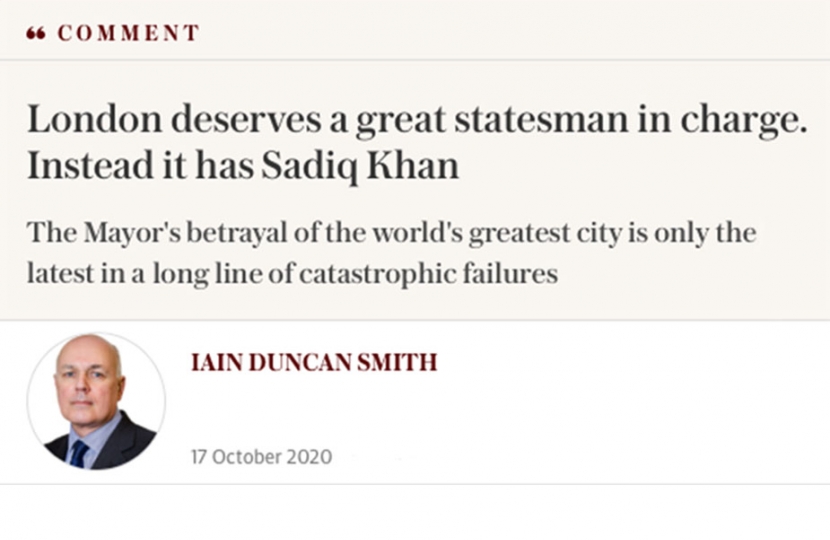 This article first appeared in The Daily Telegraph 17.10.20.

London is one of the great cities of the world. It is a world leader in entertainment and the arts, has some of the best restaurants and nightlife on the planet and, is of course, both the global centre for financial services and the home of Parliamentary democracy.

You would assume that such a great city would be led by a great public figure, of stature and of note. Someone who demonstrated by their leadership how a complex and diverse city could thrive. In short, the sort of power figure who would even, in certain circumstances, be treated as an equal by world leaders.

Yet here in London we have Sadiq Khan, a man whose irrelevance is only matched by his incompetence when called upon to make decisions.

His latest betrayal of our nation’s capital has come with his demand that London be placed into tier 2 restrictions at a time when most of his fellow mayors were desperately begging the UK Government not to raise restrictions. He is either oblivious to or simply does not care about the devastating effect these policies will have on London, the powerhouse of the UK economy.

There are a huge range of sectors, from sandwich shops to banks, that will be affected – to varying degrees – by tighter Covid rules. The West End alone accounts for around four per cent of UK GDP and it is utterly flat.

Khan’s answer to this devastation has been, as usual when he has made a mess of something, to blame the Government, a tactic he combines neatly with his endless appeals for more money.

Ever since Covid first hit, the mayor’s approach has been a bundle of contradictions. First he said transport was safe. Then he decreed that it wasn’t. At one stage keyworkers were crammed onto busy Tube trains because Khan in his wisdom had said that the number running should be slashed. Then there was the mess over whether he was going to give drivers PPE, despite 14 transport workers dying of Covid-19.

But a simple glance at his abysmal record since he came to office shows that Khan was never likely to rise to the challenge of coronavirus.

He came to power on a swathe of promises which have since gone unfulfilled. He pledged to build 264,000 new homes, yet he’s built only 52,000. Despite the fact he was handed £4.8 billion by the Government to build 166,000 affordable homes, he has built less than a half of his promise. He also said he would reduce crime, only for London to witness an epidemic in gang violence, resulting in the senseless deaths of young people and the growth of a culture of criminality.

Just before the lockdown, homicides were the highest in 11 years, robbery was up 73 per cent and knife crime and burglary were up 38 per cent. When confronted by violence on the streets, with police chiefs crying out for more funding, he chose to raise the culture budget by £11.4 million – the equivalent of hiring an extra 162 police officers.

His running of the Transport for London’s (TfL) budget has been utterly appalling. He has already received bailouts of £3.6bn for Crossrail and a further £1.6bn in May. Earlier this month he was back demanding more – a further £5.6bn to keep the transport network going for the next 18 months. All of that is money from taxpayers from across the UK, many of whom can only dream of having the sort of public transport options available to Londoners.

Of course there have been reduced revenues due to the pandemic, but that is no excuse for the dreadful decisions, such as his misleading and unsustainable fares freeze pledge, taken beforehand. Presumably his plan was to have fought and won his second term before the full horror of what he had done to the TfL balance sheet became clear. There is a great deal of irony in this having been exposed because the election was delayed.

All this would be bad enough if the Mayor were merely incompetent, but the pattern of his tenure shows that he has some truly warped priorities. Like some Tudor monarch, he has surrounded himself with the trappings of power. His private office staffing budget has risen by a staggering 60 per cent and City Hall office spending by £527m. While everything has been falling apart at home, he has spent £8,355 on overseas visits.

His PR budget alone has risen by almost £3m and he has become notorious for his contrived photo ops. As his reputation as a man who can’t run anything has grown and grown, his sole answer has been to try and take credit for almost anything that works in London, even if he had nothing to do with any of it. You’ve heard of “pop up restaurants”. Well, Khan has mastered the pop-up mayoralty. No wonder he needs to spend so much on spin doctors.

At a time when London needed real leadership it has had someone in charge whose whole purpose is self-promotion. A weak mayor at a good time is a problem. At a terrible time like this, when London needs its case to be heard, it is a disaster.

The Prime Minister today urged MPs in the House of Commons to pass new COVID regulations, to keep transmission down and beat the virus